I started to make a selvedge quilt a long time ago. Basically in between other projects or even concurrently, I’ve been sewing together strips and scraps of selvedge and leftovers from other projects into loose log cabins. I don’t like cutting off the sewing machine thread in between bits, so having a basket or two of strips beside the machine means it’s easy enough to have this going. I think I moved up to Auckland with three or four decent sized log cabins, that was two and a half years ago now and I’ve been pretty consistently sewing since.

At the start of the year I realised I’d been doing this long enough I could make a quilt of it. I used a couple of mismatched blocks to change things up a little, made sure the log cabins were the same size and sewed them together with wide white borders. It was kind of weirdly tall and thin so I made use of the long pieces of strips I’d been sewing together as well, with an eye for just this kind of use. The piece I used for the sides was so wide I was able to cut it in half lengthwise so there’s some symmetry there. The top and bottom is mostly leftover square shapes which I sewed into a long piece.

I did this while I was on my summer holiday, got it assembled and pinned, and then left it for a while so I could get some more urgent baby quilt projects done. For the backing, a huge leftover piece of cheater quilt fabric which I had from a baby quilt project.

Once it was time to pick it up and hand quilt I had to think about who was going to receive this beauty. Not everyone would appreciate a ‘leftover bits’ quilt, and it’s so bitsy, so many different fabrics. Then I thought of the perfect recipient and became excited to finish and give it to her.

I picked out a couple of details to showcase, but as you can see from the closeups there’s a lot going on in this quilt. I love it to bits, and I hope Alexis and her cat, Toby, do too. 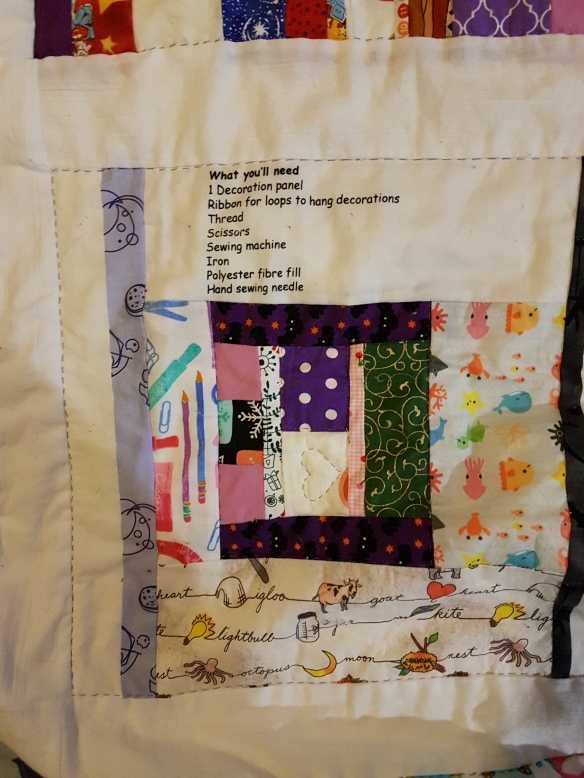 The Bourne Identity
Directed by Doug Liman
Written by Tony Gilroy and W. Blake Herron based on the novel by Robert Ludlum
(number 373)

I disliked this movie quite a lot when I first saw it back in 2002 because I found the violence a bit to realistic and it was uncomfortable. Also not a great treatment of the woman character? Maybe?

But the thing I really like about this movie, is that many years ago at Kapcon, I was part of a game called Being Matt Damon which Nick ran, and we all played different Matt Damon characters meeting up to save our buddy Ben Affleck. I was School Ties Matt Damon, Jon was Jason Bourne and he had a lot of the best lines of the game. We’d all be talking and trying to plan or whatever and he’d be like ‘I’m in Marrakesh! I’m taking down some terrorists. I call these guys.” and it was magical.

I watched this with Anna, who had never seen them before but as it’s a blockbuster was keen to give it a go. (I watch most of the weird stuff and war films without her.)

I love Franka Potente, by the way. This movie made me want to watch Run Lola Run a lot.

So, the movie is based around a central mystery: who is Jason Bourne? and once you know the whole mystery it’s pretty hard to be involved in the suspense. Maybe I just don’t like action movies enough. I certainly wasn’t taking it as seriously.

Jason: I just had a meeting as Jake Kane
Marie: I just saw Jake Kane’s body, in a morgue here in Paris. But if you’re Jake Kane..
Me: then who’s flying the plane?

I dunno, I guess this was groundbreaking at the time because it’s largely not a funny action movie. It’s deadly serious and all the men are very tough and the body count is very high. I don’t know. Because it was the first time Ludlum’s book was made into a movie. The violence is realistic.. or at least, it probably was at the time. I guess more movies got brutal after this one? Things like Batman Begins and… I dunno. Other brutal action flicks, they’re probably able to be made because of the success of this one.

Does it make me love the people? I mean, I love Franke Potente going in so she had an advantage. Yeah, I think generally she acts in a way that’s consistent with a modern woman, she doesn’t just accept shit from him, she questions him and outsmarts him at the hotel and generally is a useful character, couldn’t be replaced by a sexy lamp.

Bechdel test: No. We have Marie and Nicolette but they’re never in the same scene.

State of Mind: Anna, five minutes before the end: what just happened? Who killed who?
Me: some guy… with a gun? shot someone.. and they died? I guess?
Anna: that could have been anyone in this film.

once the silly happy ending occurs, me: It’s over.
Anna: thank fucking god.

Generally I didn’t enjoy it this time but mostly because I felt unengaged in the suspense and generally bored with the action sequences. Anna was disappointed, she felt it had been hyped a lot because it was a great movie but she just didn’t like it.

Gorgeous sixties fashions, thin and disaffected beautiful Italians and complicated relationships. I actually found this movie a lot more accessible than I feared it would be. It was hard to track down in the first place, no torrents, not at my local library – I had to hire it from Aro St Video and then it arrived on a week where I had very little time to myself to watch it. Finally I watched it on a bright but misty Sunday morning while Anna had a much needed sleep in.

it’s a but of a slow film and very much about the characters – how unhappy they are, how they deal with Anna’s disappearance, how they lounge about on the volcanic island looking concerned.

The locations are gorgeous, very alien – the weird shapes of the volcanic islands they tour through, the slopes all looking rather like an old sci fi movie. The gorgeous sixties helicoptor which looks now like a work of art to me. The men lounging around in all in one lounge suits, the women in strange gathered at the neck wrappers made of lace. Stylistically gorgeous. The plot is a little less engaging.

The scenes where dozens or even hundreds of men appear just to stare at women are truly horrifying though, n

Does it make me love the people? I dunno, they’re all sort of horrid aren’t they? I mean, yeah it sucks when your friend disappears but drowning it out with a sad love affair doesn’t really make you a good person. They’re all a bit rich, disaffected and solemn for me. I guess it could have been a more engaging treatise on humans dealing with loss but it didn’t quite grab for me. Maybe because I kept wanting the women to kiss when they were alone together in their bedrooms and boudoirs.

Bechdel test: Yes, over and over. Early on Anna and Claudia talk about how actually there wasn’t a shark and Anna made it up. Claudia and Patrizzia and Giulia all talk about where Anna has gone. Lots of named women named characters 🙂

Corrado: Giulia is like Oscar Wilde. Give her all the luxuries and she will manage without the little necessities.

State of Mind: It dragged, and the people are pretty repulsive. I was happy when it was over, but the styling is brilliant and it’d definitely a beautiful movie. One that you could happily have stills from as art up on the wall. But yeah, I maybe didn’t need to watch a two and a half hour movie to know that rich people can be sad.